7 Safe Pregnancy Exercises For Every Trimester

When I was pregnant with my first child, I was working as an editor at a parenting magazine and I received a book about how to have a healthy pregnancy and there was a chapter devoted to safe pregnancy exercises.

At that time, I was teaching Spinning classes and running a few days a week. Since I had previously had a miscarriage however, my doctor suggested that I back off my workouts until I was 12 weeks pregnant and in the “safe zone.”

I knew the benefits of exercise during pregnancy and the importance of staying active, but without my favorite workouts, I needed to find something that was safe and I could do throughout my pregnancy.

During the first trimester, as my belly started to grow and morning sickness kicked in, I found that I was more tired, had less endurance and my balance wasn’t as strong.

So although I tried to start running again, it just wasn’t happening. Instead, I relied on walking, weight training, prenatal yoga, and some simple stretches and core exercises.

Whether you’re in the best shape of your life, or just starting out on an exercise journey, there are tons of safe pregnancy exercises and workouts to help you have a healthy pregnancy.

Is it safe to exercise during pregnancy?

The American College of Obstetricians and Gynecologists (ACOG) recommends women with normal, healthy pregnancies get between 20 and 30 minutes of moderate intensity exercise most—or all days—of the week.

Although exercise doesn’t increase your risk for miscarriage, low birth weight or early delivery, there are certain conditions like placenta previa and preeclampsia that would make exercise off limits.

Always check with your OB/GYN or midwife first before exercising, even if it’s your normal workout.

What are the benefits of exercise during pregnancy?

According to a September 2016 study in the American Journal of Preventative Medicine, 60 percent of women don’t get enough exercise, even when activities like walking to the store are included.

Yet with so many benefits of pregnancy exercise, it’s a win-win for you and your baby.

Healthier babies
Studies show pregnant women who exercise give birth to children who are healthier during infancy and beyond.

In fact, an August 2019 study in the journal Medicine & Science in Sports & Exercise found newborns whose moms exercise during pregnancy are more adept at movement and are potentially more likely to be active throughout their lives, which can reduce their risk for childhood obesity.

Studies also show women who exercise during pregnancy are less likely to gain excess weight, give birth to babies who weigh more than 9 pounds (also known as macrosomia), and less likely to have caesarean sections.

Fights fatigue
Most pregnant women feel sluggish, particularly during the early weeks of pregnancy and then again as they near their due dates.

Although the last thing you might feel like doing is going to the gym, getting in a workout—even if it’s walking, swimming or a prenatal Yoga class—can give you a boost of energy.

Prevents pregnancy constipation
Constipation is one of the most annoying side effects of pregnancy and it’s quite common—between 11 and 38 percent of women deal with it.

Blame it on your hormones, prenatal vitamin, and changes in your diet, but constipation can also be a result of being sedentary so it’s a good idea to carve out time for exercise most days of the week.

Eases aches and pains
Staying active during pregnancy can help ease low back pain, pelvic pain, leg cramps and round ligament pain which are all common during pregnancy.

Improves sleep
When you’re dealing with heartburn, aches and pains, your growing belly and frequent trips to the bathroom, a good night’s sleep can be hard to come by.

Yet regular exercise can help you fall asleep and stay asleep more easily and help you cope with the stress and anxiety that might be keeping you awake.

One caveat: don’t exercise too close to bedtime since it can have the reverse effect.

Shorter labor, faster recovery from childbirth
Exercise during pregnancy can help build up your strength, muscle tone and endurance which may make labor shorter and less painful.

In fact, a May 2018 study in the European Journal of Obstetrics & Gynecology and Reproductive Biology found women who exercised throughout their pregnancies had shorter labors and were less likely to get an epidural.

Healthier moms
Staying active during pregnancy can help you establish a healthy habit that you’re likely to stick with after giving birth and as a result, prevent certain conditions.

For example, moving throughout the day in the weeks after delivery, and exercising once you get the all-clear from your doctor, may lower your risk for deep vein thrombosis (DVT) or blood clots.

It can also help keep your energy levels up despite the sleepless nights and 24/7 care your newborn requires.

Helps you lose the baby weight
Exercise can help prevent excess weight gain during pregnancy and help you shed the post-baby lbs.

Certain exercises can also help prevent or recover from conditions like diastasis recti, or a separation of the abdominal muscles that affects more than 50 percent of moms.

Yet studies show exercise during pregnancy may prevent it.

In fact, a September 2017 meta-analysis in the journal Birth found women who participated in various types of exercise like stretching and breathing, walking, aerobics, Pilates and yoga during pregnancy had lower scores on depression symptom tests than women who didn’t exercise. 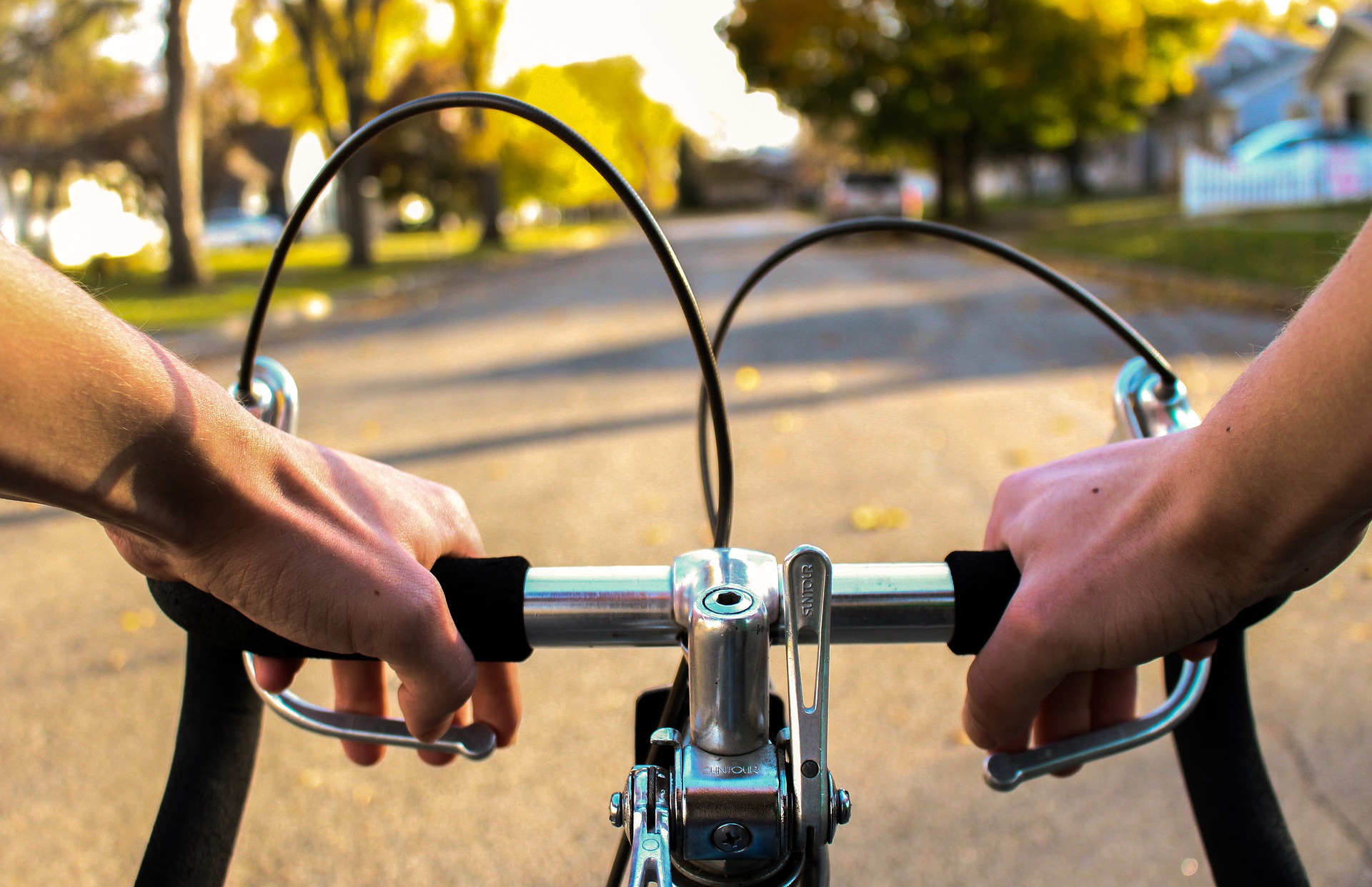 Workouts to avoid while pregnant

Although most types of workouts are safe, there are reasons to stick with safe pregnancy exercises.

You should avoid workouts that could cause you to be hit in the belly such as contact sports like softball, volleyball, basketball and tennis.

Workouts that could cause you to fall should be avoided as well. Think downhill skiing, surfing, water skiing, off-road cycling, and horseback riding.

Since staying hydrated is really important during pregnancy, it’s also best to avoid workouts that could make you become overheated, such as hot yoga or even walking outside on a hot, humid day.

There are also simple, gentle workouts you should avoid, such as those where you need to lie on your belly or stand still or have twisting movements.

After 20 weeks of pregnancy, you should also avoid exercises that require you to lie flat on your back. 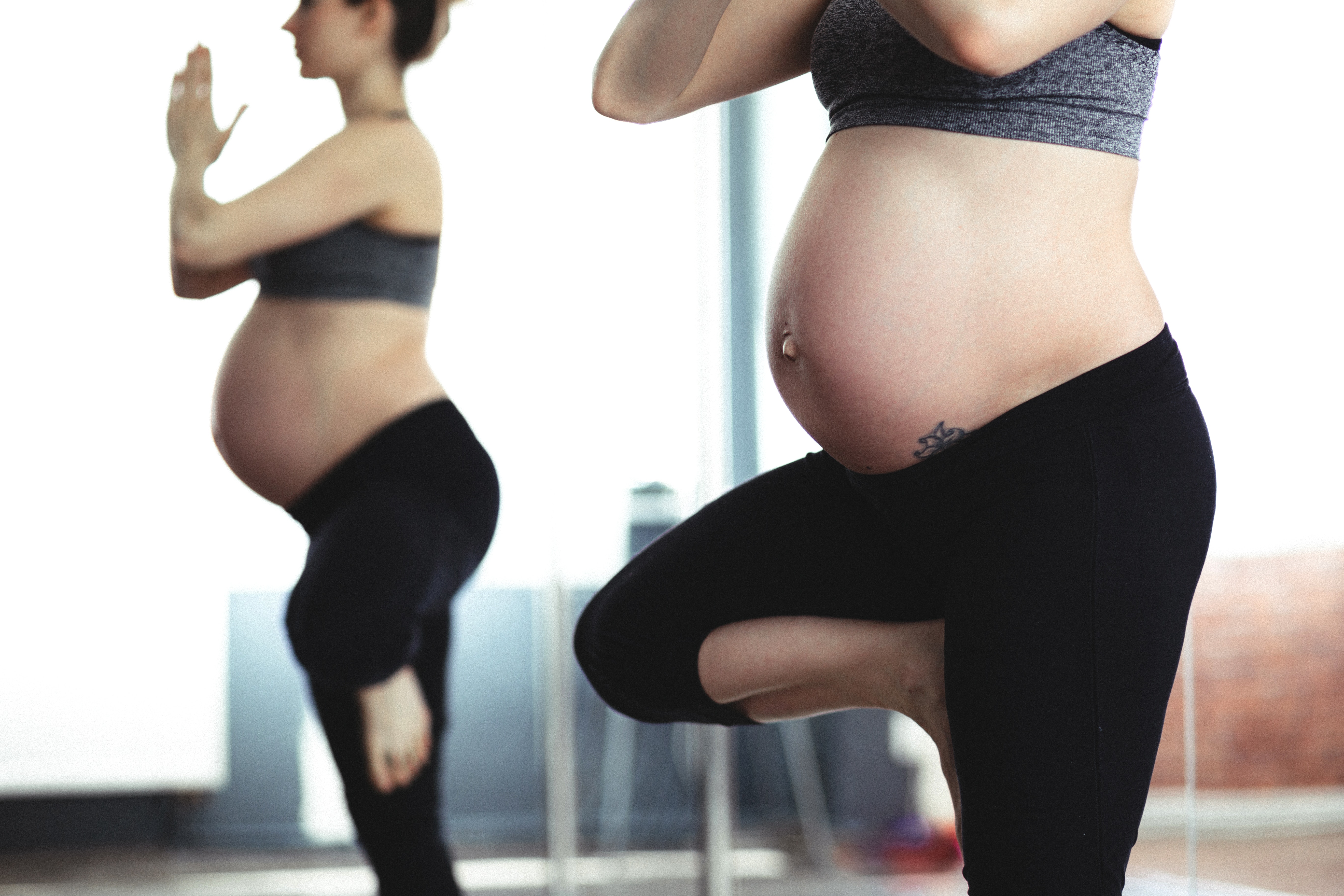 Whether you’re heading out for a brisk walk or prenatal yoga is more your speed, here are some tips to consider to ensure your workouts are safe, beneficial and fun.

Always warm up
Before you start any type of exercise, it’s always a good idea to start off with a warm-up for at least 5 minutes. A warm-up helps the blood vessels dilate and contract so you won’t feel out of breath, and it helps to prevent injuries.

Staying hydrated is how your baby gets all of the nutrients you consume and can help prevent urinary tract infections (UTI’s), constipation, headaches and swelling.

The National Academies of Science, Engineering, and Medicine recommends pregnant women drink 8 to 10 glasses of water a day.

Start exercising even if you haven’t been active
If you didn’t exercise regularly before pregnancy, it’s not only OK to start now, but it’s recommended. However, you should start out slow and gradually increase the intensity and time.

If you regularly exercised before getting pregnant and you have a healthy, uncomplicated pregnancy, you can stick with the same type of exercise, even high intensity workouts.

You should however, talk to your provider first to make sure you’re not going overboard.

Look for prenatal workouts
While Pilates and Yoga for example, can be great, low-impact workouts, some programs include movements that should be avoided during pregnancy.

When possible, it’s a good idea to choose prenatal programs which are geared specifically for pregnant moms or at the very least, ask the instructor for modifications.

Cool down
Just as your warm-up is important, be sure to make time at the end of your workout to cool down which will steadily and safely decrease your heart rate.

Listen to your body
When working out, don’t try to push yourself too hard and pay attention to how you’re feeling.

If you feel dizzy or faint, have shortness of breath, pain, swelling or weakness in any area of your body or other symptoms that you’re concerned about, stop and call your provider.

Likewise, if you feel sluggish or not like yourself, throw in the towel.

Safe pregnancy exercises for every month of your pregnancy

When it comes to choosing your workouts, there are some workouts that are safer than others, but the key is to choose something that is enjoyable and that you’re more likely to stick with.

Walking
Walking is one of the best safe pregnancy exercises because it’s gentle on the muscles and joints, plus it’s free and can be done anywhere.

Swimming
Swimming is a safe, effective total body workout and when you’re pregnant, getting into the pool and feeling weightless is an amazing feeling.

What’s more, an April 2018 study in the journal Psychosomatic Medicine found pregnant women who did resistance training twice a week had better mood and energy levels than women who didn’t.

Although strength training with weights can be safe during pregnancy, there are some movements that can cause injury or misalignment of the muscles.

Instead of maxing out on your reps, stick with lighter weights and more reps.

If you’re new to lifting weights, start out with light weights or use a resistance band. You might also choose to work with a trainer for a few sessions to learn how to lift safely.

Looking for a prenatal workout program? FIT4BABY is designed for pregnant moms and it combines cardio, strength training, balance, flexibility and meditation.

Of course, after 20 weeks, you’ll also want to avoid anything where you’re lying on your back.

However, safe abdominal exercises during pregnancy can help to ease back pain, may make your labor easier and can prevent diastasic recti.

If you’re looking for a program, I recommend EMbody, by Every Mother, which is the only fitness method proven to prevent and resolve diastasic recti.

Experts say prenatal yoga can improve sleep, increase strength and flexibility and ease aches and pains throughout the body.

Prenatal classes are always great because of the community aspect, but if you’re looking for an at-home program, try Prenatal Yoga with Desi Bartlett.

Spinning
Spinning classes can be really intense but they’re actually designed for each person to go at their own pace.

Be sure to stay hydrated, avoid getting overheated and instead, go at your own pace. If standing up and riding is too challenging, bike while sitting down, for example.

Dance
Salsa, cardio dance and Zumba can all be fun, safe exercises pregnancy exercises that are easy on the joints, and can boost your energy and help keep your endurance levels up.

What are some of your favorite safe pregnancy exercises? Let’s open the conversation–leave me a comment!